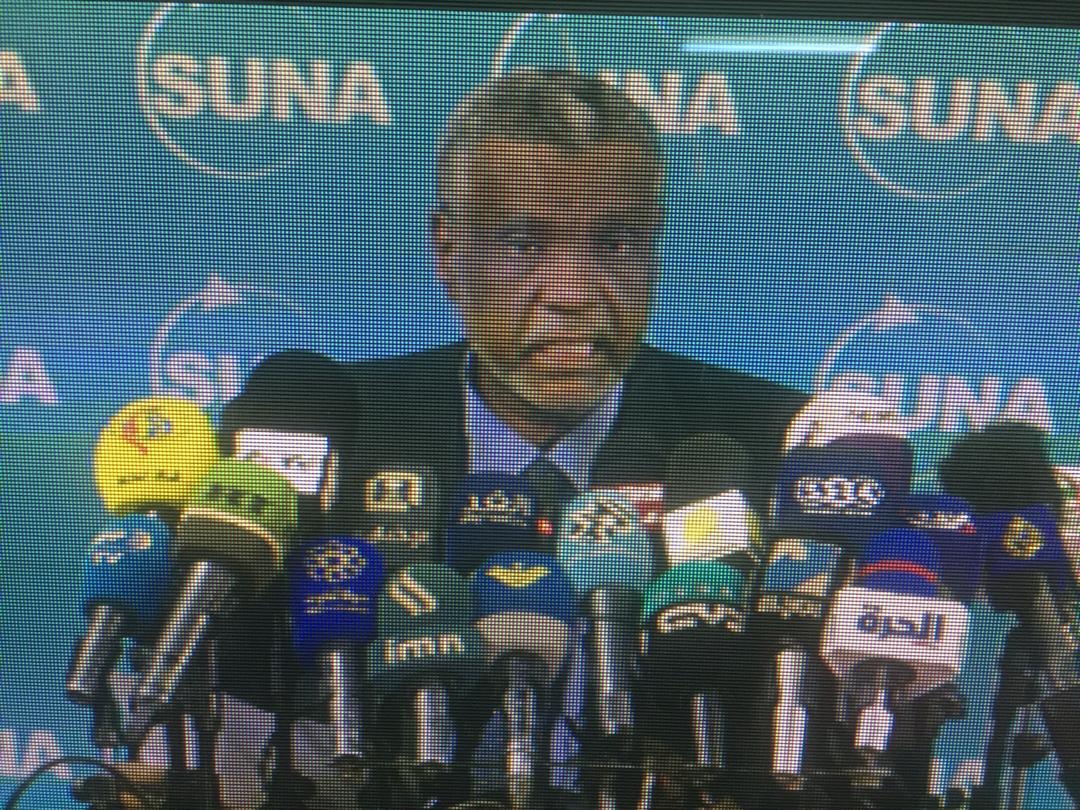 Khartoum, Feb. 7 (SUNA) – Chairman of the higher committee for supervising investigations in the recent events in the country, Amer Mohamed Ibrahim, pointed out that the Public Prosecution received today (Thursday) the final report on the death of the teacher Khashm Al-Qirba, Ahmed Al-Khair Awad-Al-Karim, where the report proved the presence of severe injuries in the form of bruises spread in the back and the back of the two arms and the right kidney and the right thigh and mid-legs that was caused by the hit with a sharp or solid instrument.
At a press conference at Sudan News Agency (SUNA) Thursday evening, the report attributed the death to sporadic injuries in the body, resulting in fatal complications that caused the death.
Amer said that the state’s Prosecution in Kassala State received a statement from the Kassala Hospital on Friday, February 1, 2019, with the arrival of the body of the deceased teacher Ahmed Al-Khair Awad Al-Karim, indicating that the higher prosecutor in the state moved to the hospital and found that the supreme attorney in Kassala State arrived at Kassala hospital and concluded in his investigations that the teacher Ahmed Al-Khair Awad Al-Karim was detained on January 31, 2019 in the local security unit in Khashm Al-Qirba and was deported on Friday, February 1st, to headquarters of the security in Kassala State and on the way the death occurred.
He said that the Supreme Attorney of Kassala State has given a directive to refer the body to the forensic doctor in the morgue to find out the causes of death, but due to the absence of a forensic doctor in Kassala he gave a directive to refer the body to the Gedarif Hospital because there is a forensic doctor there.
He noted that the Public Prosecution has questioned the doctor who received the case in Kassala Hospital in addition to the Medical Director of Kassala Hospital and two citizens who were detained with the late at the Security Unit in Khashm Al-QIrba, and deported to Kassala where they were interrogated by the supreme attorney and then the body was referred to the Gedarif Morgue on February 2, 2019.
He said that samples from the body of the deceased were taken from the stomach, blood and kidney and sent to the Criminal Laboratory in Khartoum to examine whether there are any toxic substances or organic drugs or other.
Amer indicated that the supreme attorney in Kassala State has moved to Khashm Al-Qirba Locality and interrogated the brother and uncle of the deceased and other persons who have been with the late teacher Ahmed Al-Khair.
He said that the forensic doctor was also interrogated after eceiving the initial report whether there were other visible attacks on the body of the deceased and whether there were any traces of sexual assault with a sharp or other instrument, adding that the forensic doctor stated in his report that no signs or signs of sexual contact were found and there was no damage or malformation of the descending colon to the rectum through the abdominal anatomy Besides, there were no traces of visible blood in the underwear of the deceased.
He said that the supreme attorney has addressed the Director of the Security of Kassala state to report on the names of the force that investigated the deceased with the security unit of Khashm Al-Qirba and the force that was sent to bring him to Kassala, where legal proceedings will be taken against them.
MO