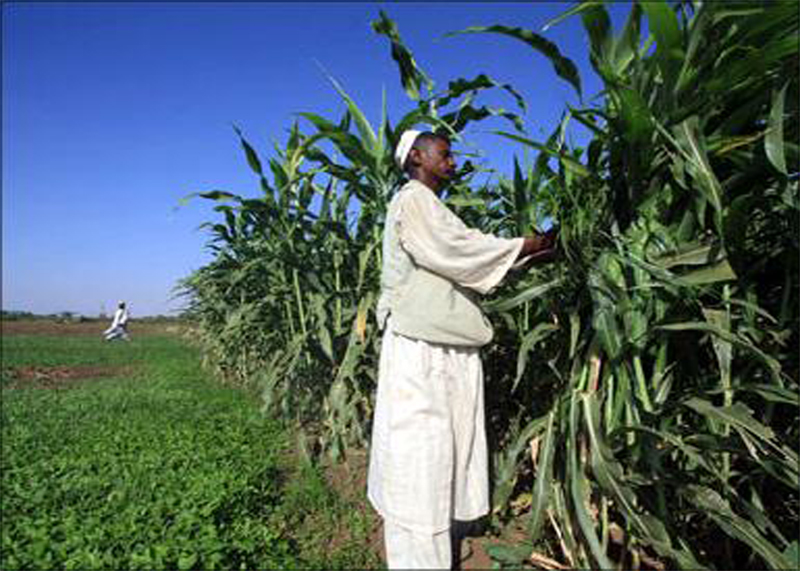 Khartoum 11-9-2011(SUNA)- concerned sides of achieving the sulf- sufficiency of wheat crop plan to raise the horizontal areas to 675.000 fdden rather than 409.000, in increase amounted of 85% from the area of the last year and to increase the total product of wheat from 354.000 Ton to 804 .000 Ton. This rate represents 4%of the total local consumptions, according to the plan of ministry of agriculture to the winter season, that listed in the meeting of the economic sector. The plan of ministry of agriculture come in frame of the three-year program to sustainable economic development and the keenness of the government to increase the country's production of wheat addition to provide the necessary imputes and finance, said minister of finance, Ali Mohamed after the meeting. According to that the amount of 100 KG of wheat estimated of 150 SUD. The price will fix for the coming 5 years, available to increase, reported minister of agriculture Dr. abdul- Haliem mutaffe. To that reasons and in accordance to economic visions , the issues of, preparing the suitable environment to the agricultural production and its developments, raising the capacities of the producers, solving the problems of the agricultural lands, modernizing the agricultural systems and adopting the concept of the strategic partnership, are main elements to achieve food security in the country. Besides to the importance of providing the necessary resources to executive the state 's plan , that target to realize the self- sufficiency of the strategic commodities and to prepare a vision on the mechanism of administrating the agricultural projects to secure of utilizing all lands , that specialized to produce wheat. Addition to strengthen the role of the private local and foreigner sector and admit it as an original partner in the productive process. Important to say, a special program of supporting the private sector was accomplished through the plan of agriculture revolution through supporting the farmers to obtain the modern necessary agricultural machineries on suitable premium It was so necessary to adopt an attractive price of wheat crop before the season to encourage the farmers and realize the stability and sustainability of cultivating wheat, because the available quantities of wheat to the international trade are not more than 150.000 tons /year regarding to total production, that estimated of 700.000 million tons, may increase or decline according to the environmental conditions. On his side asserted the advisor and ex- minister of the agricultural , Prof. Genief that wheat in the national program could surpass the recent traditional small cultivated areas to a wide areas in Upper Al- Trues lands( in states of nahar -Al Niel, White- Nile and north state) of 2-3 million fddens , that irrigated with modern irrigations technology. In the same context, concentrated the regular bulletin issued from Bank of Sudan that one of the main goals of the three-years recue program(2011-2013) , is to fill the gab of wheat to provide suitable quantities of flour to cover demands of consumption, what required a full coordination between ministries of industry and agriculture . Minister of finance Ali Mohammed declared in a statement listed to the meeting on acting final procedures to import 300.000 tons of wheat during the current year 2011, while the experts viewed that the government spend more than 6009 million $ to import wheat, while it was better to support the farmers with only 60 million of the amount to produce it locally. Sudan achieved the self- sufficiency of wheat in season of 1990-1991 and the consumption of the country was reached to one million tons. The production began to reduce and the gab increase during the period 1994-1997 till it reach in the last year 2009-2010 to 84%. Worth mentioned , the country produce more than 12 kind of wheat resistant to heat. Addition to the capacity of producing in a different climate environment from Halfa in north to Al- jaballen region in South.