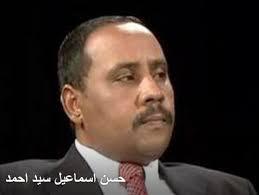 Khartoum, Mar.31(SUNA)-Minister  of Information, Communicatios and Information Technology, Hassan Ismail left Sunday  for Algeria  heading Sudan’s delegation participating  in the 42nd session  of the  General Assembly of the Arab Satellite Communications  Organization  which will begin  Sunday in Algiers  with participation of  representatives of member states.

Undersecretary  of Ministry of Information,  Ambassador  Al-Ebaid Ahmed Murweh  and Director of   Communications and Post Regulatory  Authority , Engineer (consultant) Mustafa Abdul-Hafiz already in Algiers  where they  took part  in 165 meeting of the Arabsat Board of Directors  March 29-30 under chairmanship of  Undersecretary of Ministry of Information in Kingdom of Saudi Arabia, Naser Al-Hejailan.

SUNA noted that agenda of this meeting includes approval of  the annual  report of  Board of Directors,  2018 financial  performance , election of  members of the  Board of  Directors  and place  and time of  convocation of  the coming session of the General Assembly.

It is worth mentioning that the Riyadh –based  Arab Satellite Communications (ARABSAT) was found  in 1976  by member states  of Arab League.