The late Dr. Turabi ….the speech on the South 's right to Federal Regime had changed his life trend 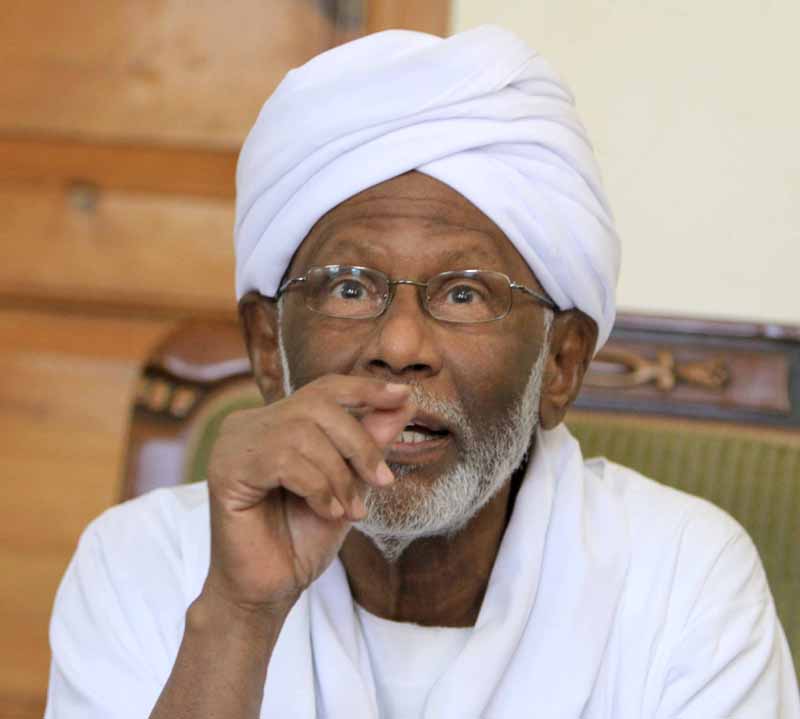 Khartoum , 23 ,3,2017,(SUNA)- Before about one year, in 5 March 2016 most of Sudanese Politicians shocked for death of Dr. Hassan Abdullah Al-Turabi , the both his Supporters and Opponents . It turns out that The man who spent on near than 55 of his life in Daw'a and politician activities , began in 1964 , when he called to solve South Sudan problem through Given them Federal Government , had built a strong tight relations with all politician trends and its Leaders from the far right to the far left and make powerful effect in Public life in Sudan. After the death , came the southern leader Mousa Al-mak Kor form Shalak Tribe ( one of big and famous tribes in South Sudan) headed a delegation included Moslems and Christans to condolence. Addressing the audience Kor said " after we assured news of Turabi death . we organized big consolation attended by Southern politicians from different trends in Juba where they spoke frank speech titled " Turabi" the man who the man who Misunderstanded, he was Lover to Freedom and very Concerned to achieve it. Adding I learned from him every thing in life , religion and policy". Dr Turabi General Secretary of Popular Congress Party , the Opponent to " National Congress party " , was born in February 1932 at Kssla city East of Sudan. After his graduating from Collage of Law in University of Khartoum 1955, he worked in the staff and he gained Master Degree from Oxford University in UK at 1957 and BHD degree from Sorbon University in France 1964. He worked Dean to Law collage a bit and leave academic line and involved actively in Public work. Al-turabi 's relation with south problem began by chance and without planning, while the late said"when I was newly returned to Sudan after years of studying in Paris. I was admired French freedom atmosphere there bwhere I lived during studying . I found chance in public symposium about South problem in Khartoum University. During my speech I called to necessity of Exceeding the current tough type of military governance to a constitutional democratic situation as requirement fore to solve South Sudan and all Sudan crises. Sudanese people , particular parties , Professionals, and students of Universities weren't satisfied on Abood regime who picked up from them their democracy right which they got after independency , so they Stirred and downed his government. Problem of Rebel and war in South was one reasons of military government Concerns , as it guided to open dialogue on different levels to find ways of achieving peace and stability in this disturbanced region. Among of these activities seminar titled " Constitutional Solves for South Topic" was convened in University of Khartoum. Dr Turabi who returned recent from Paris and assigned Dean of Law was one of the Speakers, he entered deeply inside the problem reason and said in his famous speech" Solve of South problem is in solve of north problem and both of them are in remove the current military regime and establish constitutional government based on democratic choice of people". Reactions of this symposium was one factors of falling of Abood military government and victory of 24 October revolution in 1964. As well as that this symposium took Dr. Al Turabi from his brilliant academic trend to Sites of Public work as Tireless thinker and politician to more than half century not only on Sudan map but also allover world. He succeeded in short time to transformed Islamic Movement from elite student movement to Popular movement effected strongly in the course of events in Sudan . He effected also via his renewal thought in the both Islamic and Thinking movements Leader of Uma Party Al-sadequ Al Mahde said " Al-turabi in his efforts to reviving and renewing Islamic religion was respectful and faithful to tribal and cultural diversity in Sudan, that guarantee Human Rights and lead to realize fair economic development. they agreed and achieved this conception in alliance titled ( conference of new forces) in Sixties of last century included " SANO south party " headed by southern leader William Deng. Al -Turabi formed in 1986 the National Islamic Front after fall of Numerie regime. His Party included both northern and Southern. As it was said , he was one of who planed to 1989 coup that reached Al-bashir to the power . Then he had been selected general secretary to " National Congress Party " in 1989 which transform Islamic Movement to Public movement included the All in Sudan. Dr. Turabi selected chairman of National Assembly ( the Parliament) from 1996- 1998 and because of disagreements inside the government on style and topic of freedoms , Al-bashir dismissed him form the Parliament Presidency and stopped constitutional Amendanments, which Al-turabi wanted doing . Massive dissepiment happened in the Party in 1999 . After that, al-turabi established Popular Conference Party in 1999 , that became the most enmity parties to al-bashier government. In 2000 Ruling authority closed the Party's House. Al-turabi sent to prison after his party signed Understanding Memorandum in 2002 with Sudanese People Liberation Army " SPLA" headed by Dr. John Gang in Jeneva . Al-turabi arrested again in 2009 after two days of his call to al-bashier to surrender himself to the Criminal International Court and sent also again because of his denounced elections in 2010 and described it as" Forged". Chairman of Opponent Groups communist Faroqu Isa said" Sudan lost one of its prominent persons in history of Sudanese nation and his death is lost to all Sudanese , specially to his tolerance , what now we are in strong need. One leaders of the Popular Congress Abo- Bakar Abdul- razequ said " Al-turabie was rare person , no one could successor him ". Some Arab media described Turabi on saying" He tried to mix between culture of East and West , and between Deep of idea and brilliantence of soul". Tomorrow , the general Conference of his party will organize to select the new general Secretary of the Party and launch the " Successor System" one of Dr. hassan al-Turabi 's the last contributions in political life.