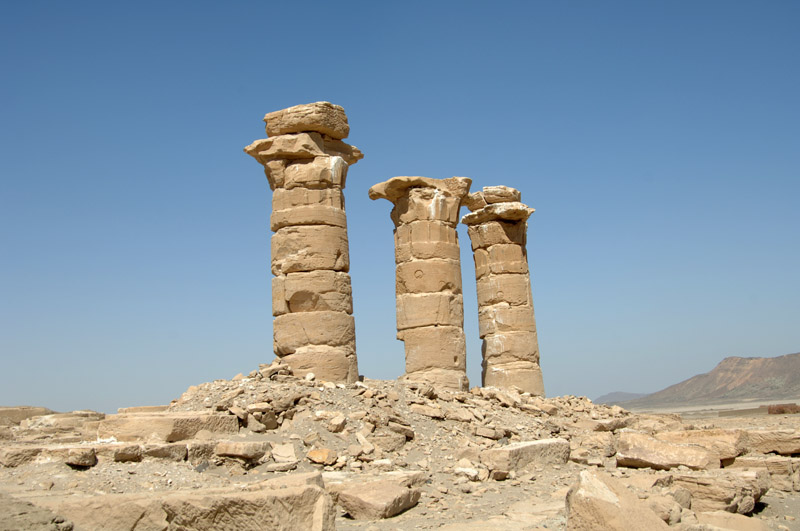 Khartoum,27,4,2017,(SUNA)- Gebel Barkal or Hieroglyphics language ( Dajo-Waab) means" the immaculate mountain" is very small mountain , Height 98 .M and located on 400 Km, from north of the Sudanese capital Khartoum, in Northern State near to Krema city at big Nile Uterine. The mountain surrounded by a Flat top. Gebel Barkal is one of pivotal historical sites in which had been long periods of Nile Valley civilizations, while Greeks wrote that in this mountain gathered Goddess of the Nile valley. Some European archaeologist scientists discovered 3 palaces and about 13 temples around the mountain , in addition an Egyptian Officer discovered in 1862 inscriptions return to the Third Transition period and delivered them to Cairo museum. Then missions came in sequences such as common mission between Harvard University and Arts Museum in Bostin headed by the famous Scientist Jorge Rezner ,University of Roma mission which worked in the mountain in 1970's period in last century under supervision of the expert scientist Donadony and in 1980's jointed to mission another team from University of Boston headed by the Scientist Kendal. In past Gebel Barkal was one of the fundamental sites in commercial roads between middle of Africa and Arabian Island and Egypt as the best place to cross Nile for both of two river banks , in addition the mountain was base part in Nabta civilization( civilian city which established on the mountain Foothill. It was announced In 20003 via UNESCO that two sites Gebel Barkal and Nabta are from Human International Heritage sites . One of engineering miracles was Kush king Tharaka's inscriptions , that established on Gebel Barkal in High of 75 m. , in Hard to find and Hidden place.The inscription was covered by big golden slide in addition to small statues mainly represents the king. Researcher in Hush Center and Chief editor of Taycity , the Specialist magazine in History and civilization of Sudan who visited the archeological site among media delegation said" Scientists surprised when they discovered that the reason of building Tahraka for his Pyramid in Norree city because the sun become Vertically between Top of the mountain where he draw his victories and his other Pyramid and added besides astronomical relation that documents two days of Nile river's flood and its Receding. Throughout Kush kingdom history , Gebel Barkal was the main center for Ritual of royal Coronation. So every new king should come to the mountain to strengthen his legitimacy and coronation via gods who live inside the mountain. As every king in Kush kingdom consultes the God in the state affaires and war issues even they said that Divine Revelation( at that time) tell the king in a message the date of ending his regime period and give him the Order to Suicide. This tradition was cancelled by the king (Arkemany ) when he changed the rule after receiving Order of Suicide . He accompanied his troops to the temple and killed all the Goddess . Some historical facts, till in Third Century B.C, approved that the kings were traveled about 230 KM from Marwee to Nabta via the river and were buried in pyramids had been build for them , putting in their mind that there is temple for the process of embalming. So we can say most of kings in that historical period gone in their trip to graves, while they are alive. Huge number of statues of Kush kings were found in Gebel Barkal , some of them found complete and stand with pride now in entrance of the national Museum Hall and some were Broken for pieces but they rebuilt such as status of king Tharaka which existed in the hall of national Museum of Sudan . A lot of stories were told about the mountain. Some stories said the mountain was the place where Prophet Mosa met the God according to the shape of mountain that seems like Kopra snake and also the Flat part of the mountain which look as if it lost the upper part and some of its Parts . In the site there are many pyramids named with " Gebel Barkal Pyramids" , known with names of some kings who buried there. Nuri city located in Eastern Bank of Nile river , near to Royal pyramids of Kush kings and far about 400 Km north the capital Khartoum and in the other Bank to the holy mountain Gebel Barkal . Inthe city found the largest number of pyramids in Sudan after the famous pyramids of Albgraoih. The Archeologist scientist Joreg Raizner was astonished , why Tehraka transmitted his pyramid away from his family and his parents and went to the other side of Nile river. The Surprised answer appeared after Development of Astronomy Science . Tehraka chose this place because a astronomical miracle happenes between his birth and his death day . in first day the Sun raise from bottom of his pyramid and in his death day , the Sun goes down from top part of Gebel barkal where he draw his victories in Top of the mountain at golden plate and with a small statue . This miracle continues till now after addition little change due to movement of Earth turnover. Nuri city include 79 pyramid, while Thraka pyramid consider the biggest one in Sudan on height of 63 m.