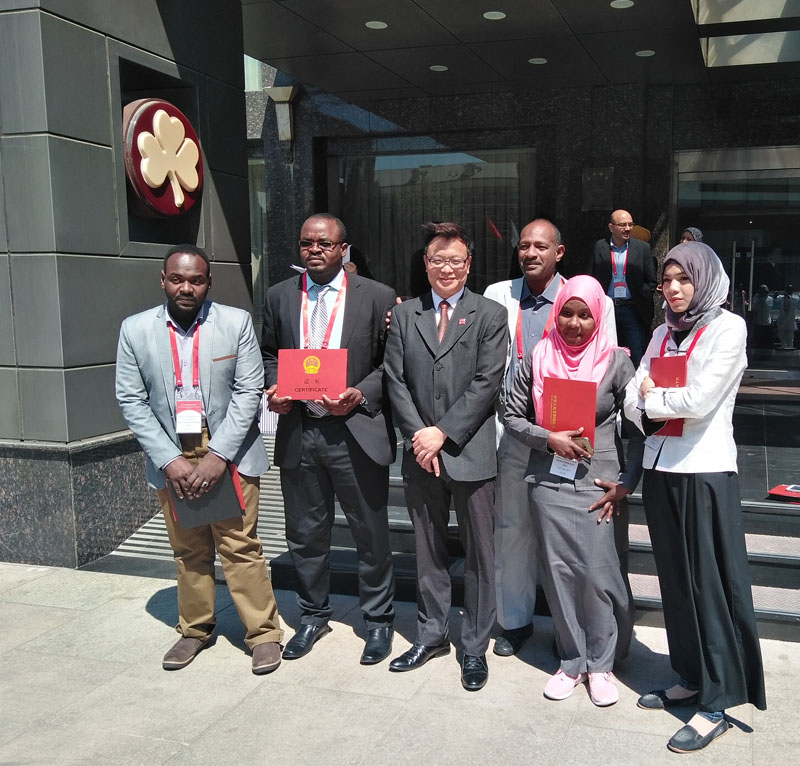 The Republic of china had organized a Seminar entitled Renowned Journalists from seven African Countries including Sudan, South Sudan, Ghana, Malawi, Zambia, Ethiopia and Egypt. And There was three participantes from Sudan News Agency. The Seminar which was held during, April, 13-26, included many lectures, programs and visits . The purpose of the seminar was to define and document media cooperation between China and African countries. During This visit we have got acquainted with china and Chinese customs and traditions . We had the opportunity to visit the Great Wall of China and enjoy one of the Seven Wonders of the World . We have also visited China Daily which was established in June 1981.and has the widest print circulation of any English Language newspaper in China (over 200,000 copies per issue, of which a third are abroad) .The editorial office is in the Chaoyang District of Beijing, and the newspaper has branch offices in most major cities of China as well as several major foreign cities including New York City, Washington, D.C., London and Kathmandu. The paper is published by satellite offices in the United States, Hong Kong, and Europe. It Published from Monday to Saturday, it serves the foreigners in China, as well as those who wish to improve their English . The visit included Anhui province which is a landlocked province of the People's Republic of China located in the eastern region of the country . In Anhui province we get the opportunity to visit Anhui News Broadcasting and TV Center which is located at the south end of Swan Lake in Hefei, Anhui News Broadcasting and Television Centre is the signature headquarters of the Anhui region's largest television producer which is provided with the best equipment and advanced technologies . And during our visit to Anhui province we were lucky to visit iflytek which is a Chinese Information Technology Company established in 1999. It uses voice recognition software and 10+ voice-based internet/mobile products covering education, communication, music, intelligent and toys industries. It Was a great opportunity allowed us to identify some of the existing technology there Iflyt ek Co., Ltd. is operating in the provision of Chinese speech and language technology; serving consumers, businesses and government organizations. Its core business includes fundamental speech technology research, development and marketing of software applications, system integration, hardware products, as well as full time technical support. It focuses on Chinese TTS (Text to Speech or speech synthesis) , multilingual TTS, TTS services, TTS chips, and Distributed Speech Synthesis (DSS) . When we visited University of Science and Technology of China We had the experience to speak to an amazing robot named Jiajia which was produced in a three years-period by a team at the University of Science and Technology of China in Hefei. Then we visited Jiuhashan Mountain which is one of the four sacred mountains of Chinese Buddhism. It is located in Qingyang County in Anhui province and is famous for its rich landscape and ancient temples, where, we learned about Buddhist and its rituals closely . We have visited China International Publishing Group (CIPG) which was founded in 1949 with a mission to introduce China to foreign countries through books, magazines and websites. CIPG has over 20 subsidiaries as well as 12 overseas branches located in the United States, Britain , Germany, Belgium, Russia, Egypt, Mexico, Japan and Hong Kong , constituting a conglomerate of foreign language publishing and marketing. Currently, CIPG has a staff of nearly 3,000 people, including over 100 foreign experts. Every year CIPG publishes over 3,000 titles of books and 30 periodicals in more than 10 languages . We have also visit Chaozhou museum and saw Chinese ancient hand writing. The seminar has further availed us the opportunity to closely know the Chinese people and their diversified culture and to enhance the standing friendship between our countries. Above all else, the seminar has enriched our knowledge and expanded our scope regarding news editing in its widest sense. By:Donyay Mohana,Mousab obeid,Rashida Adam..