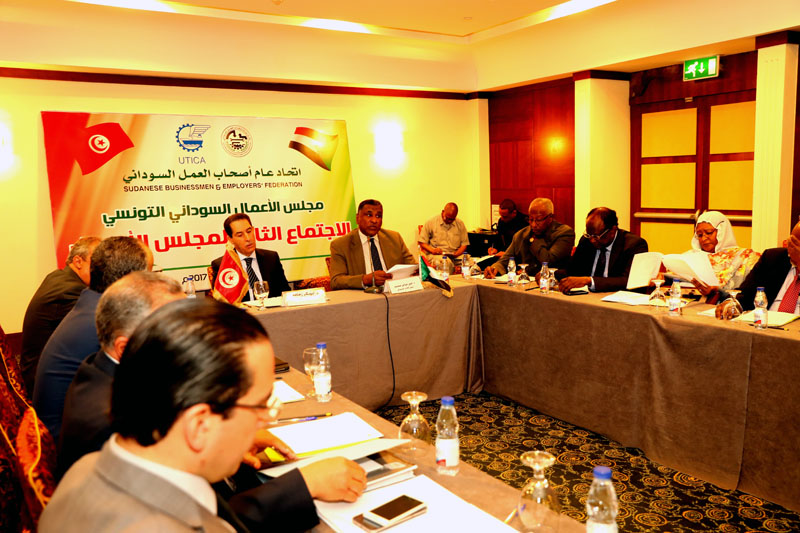 Khartoum, Jan. 24 (SUNA) - The Ambassador of the State of Tunisia to Sudan Emad Al-Rahoumi has stressed his country's keenness to boost the economic and investment cooperation relations between the two countries to further horizons to meet the expectations of the investors of the two countries for the benefit of the two peoples. This came during the opening session of the Sudanese-Tunisian Forum, which organized by the Sudanese Employers' Union in collaboration with the Tunisian Union for Industry, Trade and Handicrafts Wednesday at the Rotana Hotel. The ambassador indicated that the volume of trade exchange between the two countries was still beneath the ambition, however, the opening of air and sea lines between the two countries would raise it to standard levels. The ambassador Al-Rahoumi extended an invitation to the Sudanese Employers Union to visit Tunisia to get acquainted with the investment opportunities available there, praising the success of the forum at the level of organization and participation. The chairman of the Sudanese-Tunisian Joint Business Council from the Sudanese side Amin Abbas Mahmoud praised the role of the political leadership in the two countries in pushing forward the Sudanese-Tunisian economic partnership process to achieve the desired goals, pointing out that the visit of the Tunisian delegation coincided with the country's celebrations of independence and the lifting of US economic sanctions, affirming the endeavor of the council to enact the necessary laws, legislations and regulations to organize the trade exchange between the two countries. The Chairman of the Joint Business Council from the Tunisian side Dr. Abu Bakr Rakhamah pointed out to the Sudan tremendous natural resources and its strategic position in the African continent, which gives it the opportunity to be a gate for the Tunisian investments in other African countries, emphasizing his country's keenness to establish economic and investment partnerships with Sudan, hoping that the visit of the Tunisian delegation will culminate in trade and investment deals that meet the aspirations of investors from both sides for the benefit of the two peoples in the two countries. The forum witnessed a comprehensive presentation of the opportunities and advantages of investment in various fields in the country. The forum also included bilateral meetings for businessmen from both sides for the purpose of consultation, exchange of information and experiences on the investment process in various fields in both countries. BH/BH