TMC and DFFC Reaffirm the Points of Agreement 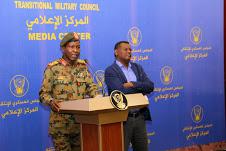 Khartoum, May 20 (SUNA) –The Transitional Military Council (TMC) spokesman Gen. Shams-Eddin Kabbashi ,explained that the round of talks held Sunday at  the Republican Palace between the TMC and the Declaration of Forces for Freedom and Change (DFFC)  reaffirmed  on  the agreed upon points during the previous round of talks .

He said the agreed upon points are represented in power and the task of the structures set for the transitional period.

Gen.  Kabbashi said the two parties have also  agreed  on the  formation  of  a joint committee to follow up the  implementation of outcomes of the fact finding committee formed by TMC on the incidents erupted recently at the sit - in area and its surroundings.

He added that the two parties also have agreed to reactivate the joint onsite committee to control the activities from within.

For his part DFFC spokesman, Madani Abbas Madani, said the two parties have agreed on the features of structures during the transitional period.

He said that   included the authority of the sovereign, executive and legislative councils, besides the duration of the transitional rule which was determined by three years.

Madani noted that an agreement was also reached to speed up the formation of onsite joint committee to avoid any hams that may affect the sit -in demonstrators.

He assured that all people are looking forward for an agreement that realizes the aspiration of the people.