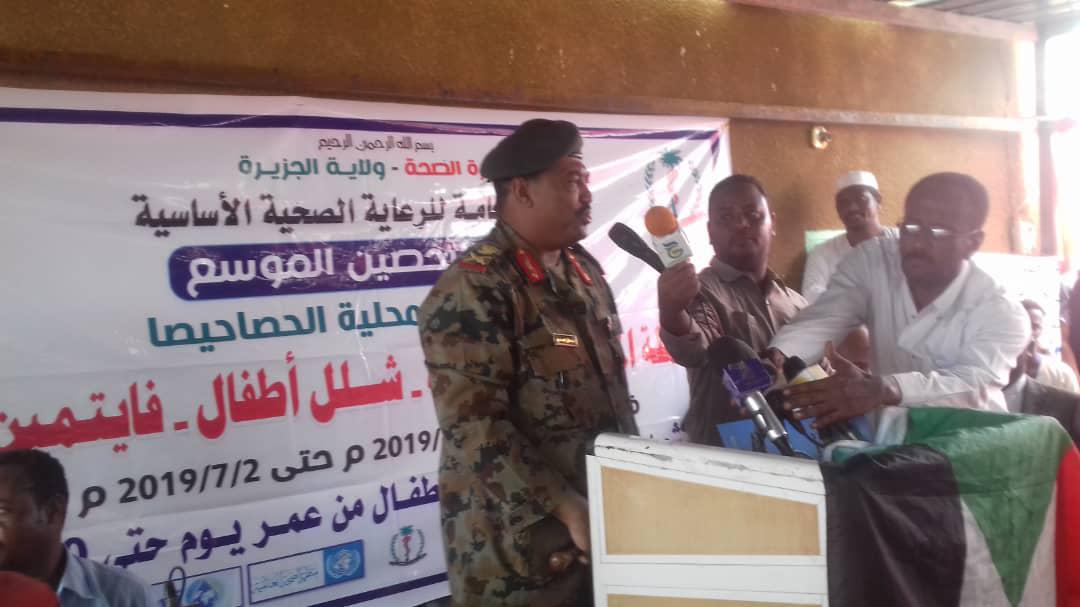 Medeni, June 24 (SUNA) The Twon of al- Freijab in al- Gazera state has witnessed the launching of the joint campaign to eradicate measles, vitamin A deficiency and the eradication of poliomyelitis.

The campaign was launched in the presence of Maj. Gene. Ahmad Hanan Ahmed Sebir, the Wali (Governor) in charge of al- Gazera State and the state’s Police Director Gen. (police) Mohemed Osman.

The governor has indicated during his addrss at the launching ceremony that the demands of the people of the state are enforceable and that his government aims to enhance security and citizens' pensions, and promote the state’s project, directing for the maintenance of al- Freijab hospital and the determination of its needs.

He called on the media organs to reflect the issues and concerns of the citizens, meanwhile, the Executive Director of the locality has asserted provision of all aid for the success of the campaign.

He pointed out that the campaign includes 3 interventions including polio for childerns from 1 to 5 years, vitamin A deficiency from 6 months to 5 years and measles vaccine for the childern from 1 to 10 years.
Mr. Kamal Al-Fadil Al-Jack, the Director of the Expanded Immunization Campaign in the state, said that the campaign will last for 10 days under the motto "Reach all the targeted".
The Director of Primary Health Care at the local hospital Ekram Fadul al-Mawla, noted that the campaign targets 276,000 children in Al-Hessihessa locality.
The representative of the al- Freijab twon, Badawi Ibrahim, has praised the efforts of the state government and the Health Organization to protect children from diseases, calling for promotion of al- gazera scheme and to pay attention to the hospitals, the schools, the asphalt roads and the infrastructure in the state.