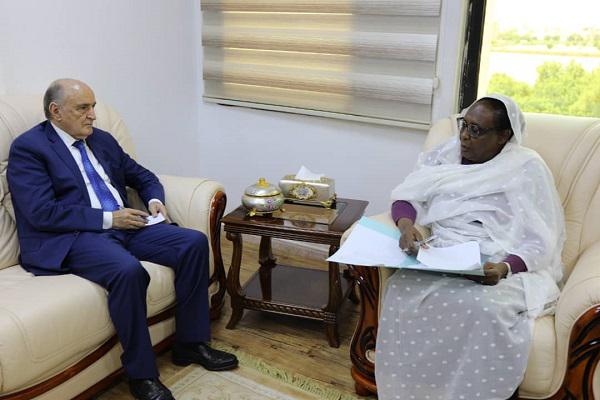 Khartoum, Sept. 15 (SUNA) – The Foreign Minister, Asma Mohamed Abdalla, has appreciated the great role exerted by the African Union, represented in its special envoy for Sudan, in the mediation that culminated in the agreement on the arrangements of the transitional period and formation of the civilian government in Sudan.

During her meeting Sunday at her office with the African Union’s representative to Sudan, Mohamed Belaish, the Foreign Minister called on the African Union to continue its efforts through institutional work to help realizing peace and stability in Sudan, writing off Sudan debts and removing the name of Sudan from the list of countries sponsoring terrorism.

She also urged the African Union to work together with the UN and the international partners to hold an international donors conference in Sudan.

The African Union’s representative has congratulated the Foreign Minister on her appointment and affirmed the African Union’s support to the transitional government and Sudan endeavors to restore its strategic role in the continent.

He expressed the African Union’s pledge to help removing the name of Sudan from the list of countries sponsoring terrorism and cancelling all the economic sanctions imposed on the country.

Belaish has promised to submit all the recommendations for assisting Sudan in the political, economic and development fields to the head of the African Union Commission for attracting financial, technical and logistic support in the coming meetings of the UN General Assembly in current September.