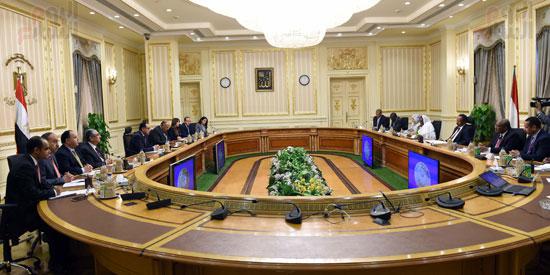 Cairo, Sep. 18 (SUNA) – A plenary sitting of talks was held Wednesday in Cairo between the Sudanese and Egyptian sides, co-headed by the Prime Minister, Dr. Abdalla Hamdok, and his Egyptian counterpart, Dr. Mustafa Madboli.

At the outset of the talks, the Egyptian Prime Minister has welcomes the Prime Minister, Dr. Abdalla Hamdok, and the accompanying delegation, affirming the keenness of Egypt to provide genuine support to the Sudanese government and people.

Dr. Madboli has described the visit of Dr. Hamdok as a historical one and came circumstances that similar to those underwent by Egypt in the year 2011, expressing his government confidence on the ability of Sudan government to manage the situation in a manner that realizes the Sudanese people aspirations.

He affirmed the readiness of the government of Egypt to extend the required support to the Sudanese brothers in the different fields that will be discussed at the visit, including the electricity power linking and railways, in addition to delivery of medical and food assistance, indicating that an action group will be formed to determine the required fields of cooperation and to set a timetable for the work in this connection.

Meanwhile, the Prime Minister, Dr. Abdalla Hamdok, has praised firmness of the fraternal ties and the common history between the Sudanese and the Egyptian peoples.

He pointed to the various challenges facing Sudan in the current critical stage, top of them is the realization of sustainable peace and alleviation the people’s suffering, expressing his great admiration of the Egyptian experiment.

He said that Sudan looks forward for assistance of Egypt to Sudan in handling the current economic issues, especially with regard the inflation, the exchange rate and investment.

Dr. Hamdok has invited his Egyptian counterpart, Dr. Mustafa Madboli to visit Sudan to discuss the cooperation between the two countries, appreciating the keenness of Egypt to support Sudan in all circumstances.

The sitting of talks has witnessed interventions of the ministers at both sides.

The Egyptian Foreign Minister, Samih Shukri, has asserted the keenness of Egypt to support Sudan and to strengthen further the bilateral relations in the coming period.

He also affirmed the keenness of Egypt to support Sudan issues at all the international forums and to coordinate stances with Sudan in the different dossiers.

Sudan Foreign Minister, Asma Mohamed Abdalla, said at the meeting that Sudan looks forward for the help of Egypt in various dossiers, including the mobilization of financial support and the removing of the name of Sudan from the list of countries sponsoring terrorism.

She referred to the consensus between the Sudanese and Egyptian sides on the cooperation in several fields, including the electricity linking and the railways.

The Minister of Finance and Economic Planning, Dr. Ibrahim Al-Badawi, stated that there are wide horizons for cooperation between Sudan and Egypt and joint optimistic projects that can be implemented in the coming period, especially in the fields of agriculture and electricity power.