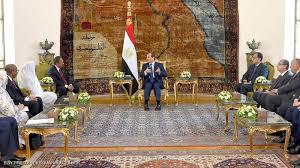 The Egyptian Presidency Official Spokesman, Ambassador Essam Radi told reporters that President Al-Sisi congratulated Dr.Hamdouk for assuming post as the Prime Minister and the announcement of the new Sudanese government, affirming the deeply-rooted relations etween the people of the Nile Valley.

He underlined that Al-Sisi expressed gratitude over Sudan success in starting the the real work toward the realizatruion of the aspirations of the Sudanese people.

The Egyptian official went to say that the Egyptian President has affirmed his country’s full support to the security and stability of Sudan and the will and options of the Sudanese people.

He commended the sincere Egyptian regional and international support to Sudan preserve its safety and stability.

The Prime Minister has also, reviewed the current developments in the country and the efforts being exerted to deal with the situation, lauding the pioneering role being played by Egypt in the region and the continent , especially, through its current chairmanship to the African Union.