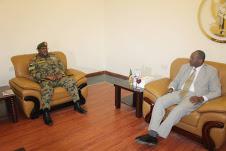 Khartoum, Sept.19 (SUNA) -The Minister of Federal Government, Dr Yousif  Adam Al-Dhai, has directed  the caretaker Wali (governor) of West Darfur State, Maj. Gen. Abdul-Khaleq Bedawi Mahmoud, to work for maintaining security and to give concern to the people’s living conditions and to patch up the rifts in the social fabric.

The Minister discussed  during meeting at his office Thursday with the caretaker Wali issues pertinent to security, services stability of the school year, warding off the floods and rainfall impact the and the preparations for the winter agricultural season.

He called for cooperation and coordination with native administration for promotion of the peace culture and peaceful co-existence as well as the  solution of disputes between the farmers and herdmen and facilitating the return of displaced  people.

He appreciated the state's efforts in collection of the unlicensed vehicles and  finding drastic solution to this issue.

Ther Wali  of West Darfur State stated that the state has been affected by the flood and heavy rainfall this year, referring to the destruction in the main roads and the people properties .

He said that the state government has adoptedt urgent plans  to address the floods and rainfall disaster, indicating that the state is planning  to establish services projects and model villages for the displaced people who voluntary return home.