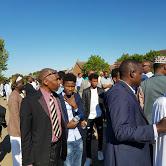 A big number of the Sudanese community members arrived from all parts in Britain to attend funeral ceremony.

It was reported that the late Rashid died after he had been subjected to a regrettable assault.

After the burial ceremony, the Ambassador Idris addressed the large gathering of Sudanese mourners and gave his condolences to the family members and the colleagues of the late Rashid in Glister town.

Sudan Ambassador has praised the solidarity and cooperation spirit among the Sudanese community members in the city and their adherence to the Sudanese social values.