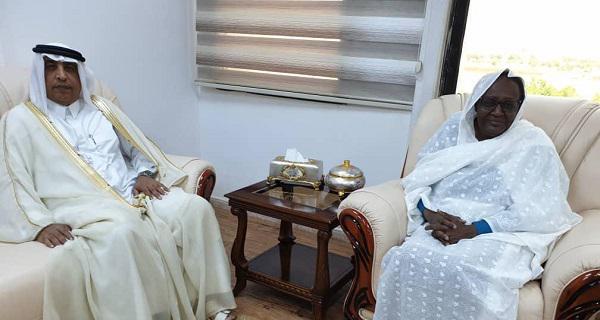 Khartoum, Oct.20 (SUNA) - Foreign Minister, Asma Mohammad Abdalla received, Sunday, at her office, the Qatari Ambassador to Khartoum, Abdul Rahman Bin Ali Al-Kobesi and reviewed with him the bilateral relations between the two countries and means for promoting the Qatari assistance to Sudan during the transitional period.

The Qatari diplomat, during the meeting, expressed his countries desire to strengthen cooperation with Sudan in all domains and exchange of support in international forums.

He outlined that his country will invest in Sudan in the agricultural, mining and energy fields.

Meanwhile, the Foreign Minister thanked the Ambassador and Qatar or supporting peace in Sudan and strengthening of relatons between the two countries, briefing him on the political developments in the country.

The minister referred to the importance of the support of the sisterly countries to the poeace process and the revocation of Sudan’s name from the list of the countries sponsoring terrorism.

‘’ Sudan looks forward to influx of more Qatari investments in Sudan and the increase of trade exchange volume’’ the minister indicated.

The minister received an invitation to participate in the Doha10th Forum on International Affairs scheduled for next, December.