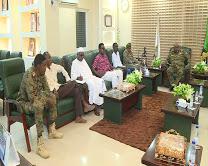 Kassala, Oct  29 (SUNA) - Kassala State's Caretaker Wali (governor), Maj. Gen. Mahmoud Babiker Mohamed Hamad, has underscored the importance of arrangement between the state’s government and the Central council of Forces of Freedom and Change (FFC) as a civil force in the context of Constitutional Document signed between the two sides.

The Wali discussed with Central Council of FFC’s delegation issues relating to health conditions in the state and the current political situation.

Member of the council Hassan Hasaballa said that the meeting was positive and the two parties have affirmed the importance of forming a mechanism be responsible for appointment and relieving from positions in a way that shall be based on consultations as stated in the constitutional document.