US Commends Kenaya, Sudan and Uganda mediation with southern Sudanese 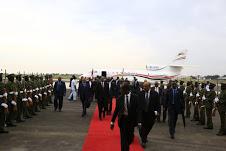 Khartoum,8-11-2019 (SUNA)-US Assistant Secretary of State’s Bureau of African Affairs, Tibor Nagy, has commended the leaders of Kenya, Sudan and Uganda for their efforts to reconcile the positions of rival southern Sudanese in a meeting held in Entebbe, Uganda

"Many thanks to regional leaders Kenya Sudan, and Uganda for attempting to mediate between President Kiir and Dr. Machar." the US official said.

The said leaders have tried to streamline the stand of president Salva Kiir of South Sudan and that of southern opposition leader Dr Rick Machar on the implementation of the agreement they concluded and revitalized in Khartoum earlier this year.

Nagy has however said his country was "deeply disappointed" that south Sudanese President Kiir and opposition leader Dr. Rick Machar are delaying formation of a unity government in South Sudan.

"This inability to meet their own deadline calls into question their suitability to continue to lead the nation’s peace process and respect the ceasefire" Nagy said in a tweet on Friday.

The leaders of the three countries Kenya, Sudan and Uganda who are member of the intergovernmental Authority for Development (IGAD) launched a mediation attempt to mend the fences between Machar and Kiir with the aim of forming a government of national unity by the 12th of current November.

The November 12 deadline was agreed upon and set by Machar and Kiir representatives earlier this year when an earlier date, March 2019, failed to be metalized. The two sides failed to form the government of National Unity after the Khartoum meeting.

The official said his government calls on the IGAD Secretariat to work with South Sudan to set clear benchmarks for progress during IGAD summit. He further stressed that U.S. stands with the people of South Sudan.

However, he has warned that "We must review our relationship with the government in light of the delay. The U.S. is considering all possible options to put pressure on those individuals who would impede peace and promote conflict.”