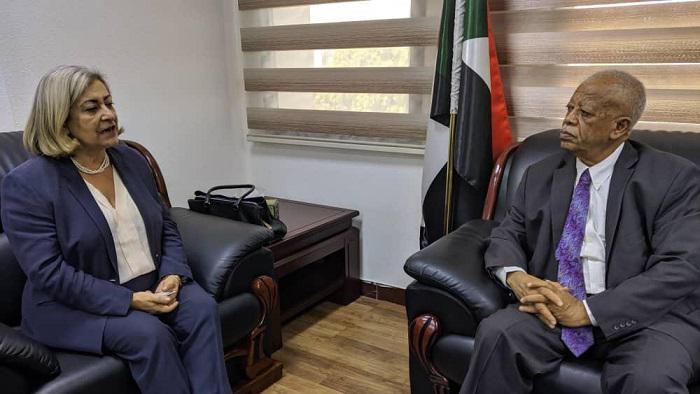 Khartoum, Nov. 11 (SUNA) The Undersecretary of the Ministry of Foreign Affairs, Ambassador Dr. Al- Sideeg Abdul Aziz Abdullah, met at his office Monday, with Mrs. Camilla Gudio, the Director of the Regional Office of the International Organization for Migration (IOM) for the Middle East and North Africa and the accompanying delegation.

Ambassador Abdul Aziz has commended level of cooperation relations between the Sudan and the organization in a number of files, including the the development of policies and plans of migration, the implementation of outcomes of the international migration charter, the facilitation of return of the Sudanese migrants, and the support of the hosting communities for refugees and migrants.

He reviewed the burden placed on Sudan by hosting large numbers of refugees, pointing to the country's roles in combating illegal immigration, calling on the organization to redouble its efforts in supporting Sudan.
On her part, the Regional Director of the (IOM) has praised Sudan's role in hosting an estimated number of refugees from neighboring countries.
She reviewed her organization's plans to work with the Sudanese government, international organizations and UN agencies in the coming period.
The two sides have indicated continued cooperation and coordination in related fields, and the support of the Organization's plans to expand its activities.
The International Organization for Migration (IOM) is the United Nations specialized agency working in various areas,  including improvement of the  immigration policies, developing immigration policies for work, raising the capacity of agencies dealing with migration files, supporting victims of smuggling and providing legal protection to migrants, and the support of the hosting communities.

The Sudan has joined the IOM as an observer in 1993, became a full member in 1998 and hosted a mission to represent the organization in 2000.