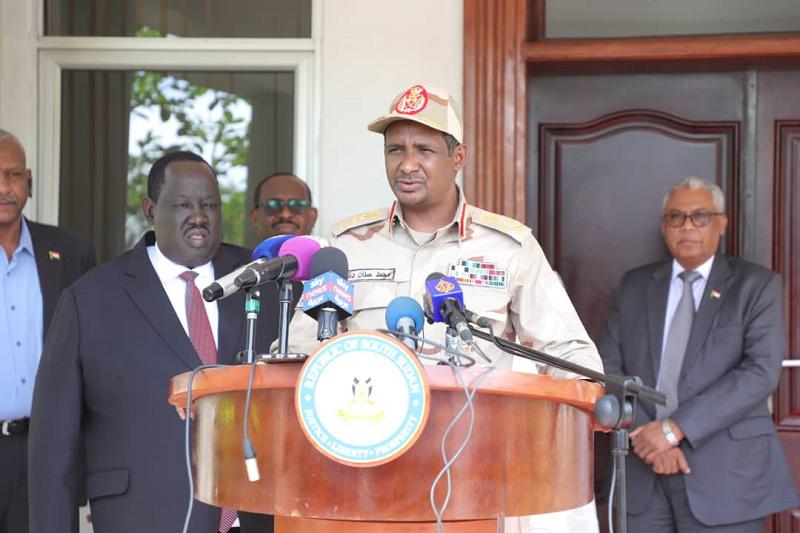 Juba, Nov.26(SUNA)-Deputy Chairman of the Sovereign Council  and Head of  the Mediation, Lieutenant General Mohamed Hamdan  Daglo has underscored Sudan support to parties in South Sudan State  and stand beside  them until peace  process is completed  and  formation of government of national unity  in South Sudan within the 100 days which was agreed upon .

The  Deputy Chairman of the Sovereign Council  was informed during meetings of the joint  political and security committees  on progress of implantation  of  outcome of the Entebbe Summit  and the timetable associated  with budgets  and steps  for accomplishment  of task of training  and  reconfiguration.

Member  of the Sovereign Council  Mohamed  Hassan Al-Ta’ayeshi  said I a press statement after the meetings  that the delegation  held a series  of meetings  within context  the role  being payed  by Sudan as guarantor  of peace process  in South Sudan  and making sure of  progress  of  procedures of security arrangements  and entering into stage of formation  of government of national unity  in South Sudan State.

He added that  the Sudan delegation  touched  the will and real desire  from the two parties  to implement what have been agreed upon ,  noting that  there was  no political differences over agenda of  security arrangements  but, he further added, there were  some  technical and logistic  difficulties  concerning commitment  with the timetable  for implementation of  the security arrangements   leading to stationing  troops  in camps , conducting training  and redeployment  of troops  in the main cities.

Al-Ta’ayeshi indicated  that there were  options  for solving  the matrix difficulties , explaining that the political will the two parties have would capable to  resolve such difficulties.

He said  that  South Sudan  was moving  towards settling  issue of political stability  during the transitional period  that would put an end  to political problems plagued  the South Sudan State.

The Member of the Sovereign Council  stated that the existing political will  was an opportunity  for achievement of peace  in South Sudan State  and Sudan , saying in case  of success of Sudan  in  the  North  and  the South  in this task  that would constitute a new history in the region  and a new approach  for African countries  for addressing  their issues via pure national agenda.

He underlined  that Sudan would exert its utmost  efforts  for achieving strategic goal for South Sudan  State as  Juba  represents the strategic  depth for Khartoum  and the region as a whole.