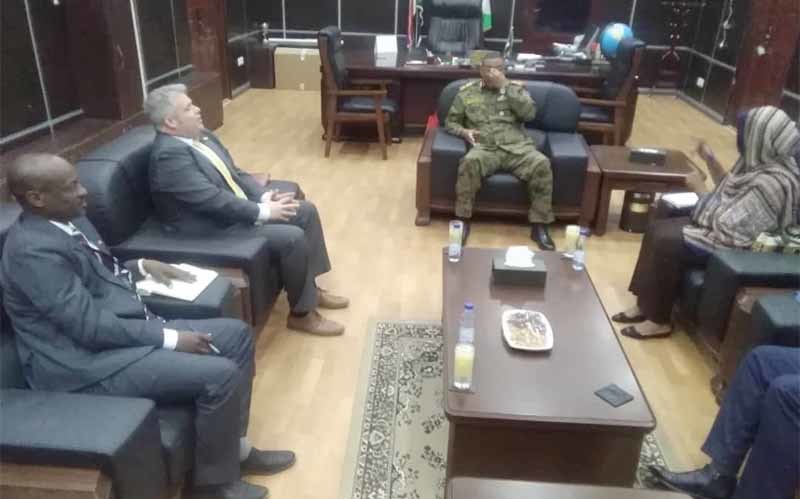 Medani, February 13 (SUNA) - In his meeting at his office Thursday with the Political Official at the British Embassy in Khartoum Matthew Trot, the Governor of Gezira State Maj. Gen. Ahmed Subair, pledged the return of Gezira Scheme  as the locomotive to the national economy through the amendment of its Law for the year 2005 and the return of its institutions. The Governor of Gezira State reviewed the plans and programs of his government to take advantage of the added value of the cotton crop by establishing gins and textile factories to reach the stage of export in the form of clothing after achieving self-sufficiency and creating several employment opportunities.  Maj. Subair said that wheat production for this season promised high productivity that contributes to filling the shortage in the country's needs of wheat, pointing to the security, political, social and service stability witnessed by the state, welcoming all national and foreign investments to the state. Subair pledged to overcome all difficulties and obstacles facing investors to attract more investments to the state, which it enjoys human and natural resources, infrastructure, stability, security and a location that qualifies it to a destination for all. For his part, the Political Official at the British Embassy in Khartoum expressed his pleasure over the visit and good hospitality of the governor of the state, explaining that the visit aims at the exploration of investment opportunities available in Gezira state in the sectors of agriculture, animal resources and industry as well as to stand on Gezira Scheme in order to contribute to its renovation. meanwhile, the British Embassy delegate stood, upon his meeting with the officials of Gezira Scheme, on the stages of the start and development of scheme, the crop composition, irrigation methods, the number of workers, the volume of production in the key crops, obstacles facing the performance and ways to overcome them.