Minister of Industry Discusses Cooperation Aspects with Netherlands and Tanzania 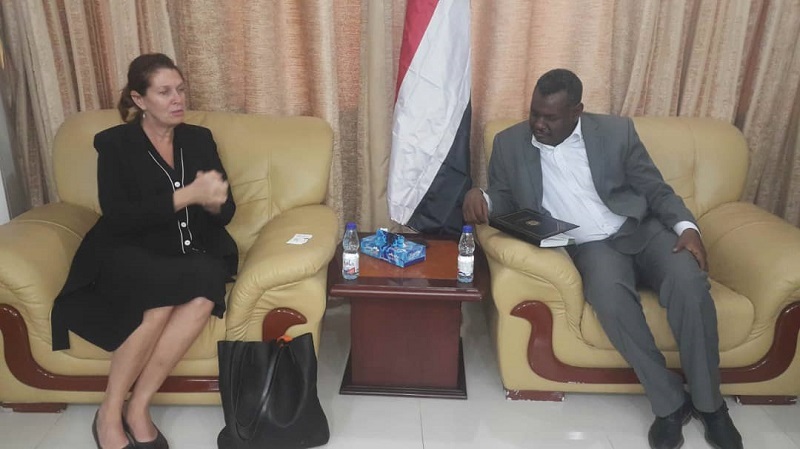 Khartoum Feb 20 (SUNA)- Minister of Industry and Trade Medani Abbas Medani affirmed the importance of opening joint cooperation in industrial and commercial activities between Sudan and Netherlands particularly after the success of December glorious revolution.

He pointed out, during his meeting Thursday in his office at the ministry with the Dutch Ambassador to Khartoum, Dr. Karen Boven, to the Netherlands' pivotal role in supporting the Sudanese exports to the European Union countries, especially as Sudan is making steadily stepping towards meeting the export requirements with high quality and specifications.

He said that Sudan is witnessing an economic movement and exchange of visits with a number of European and African countries after the success of the Sudanese revolution and achieving change, referring to Sudan endeavor to benefit from the experiences of the Netherlands and the transfer of Dutch technology, especially in the fields of food and agricultural industries, fertilizers, modern machinery and electronics.

He called on the Dutch companies to engage in joint investment projects in Sudan, pointing to the existence of the facilities and concessions for the investors from friendly countries, especially the Netherlands and sister, calling for holding a joint meeting between businessmen in the two countries.

The Dutch Ambassador stated that the door is open for the bilateral cooperation between Khartoum and Amsterdam in various fields, referring to the recent visit of the Dutch Foreign Minister to Sudan, which has caused a clear breakthrough in progress of the relations between the two sides.

She affirmed the resumption of her country's support to Sudan again after a stopping since 1991 as a result of political and security factors.

It is noteworthy that the most important projects that were funded by the Netherlands in Sudan included Al-Obeid -  Kadugli road, the maintenance of the Nyala - El Fasher road, the expansion of the Central Khartoum Foundry, the construction of the Medical Supply stores and the manufacturing of Fokers aircrafts, the provision of water to the cities of Nyala and Geneina, in addition to improving the irrigation methods in the Gezira Scheme and the energy and forestry research projects.

Meanwhile, the Minister of Industry and Trade, Madani Abbas Madani discussed Thursday, in his office in the Ministry, with the Ambassador of the Republic of Tanzania to Khartoum, Salim Kumbo Haji, the areas of cooperation between Sudan and Tanzania and ways to enhance them in the economic and commercial fields.

The meeting underscored the importance of participation in the trade fairs held in both countries, besides forming a joint businessmen council and establishing joint investment projects between the two sides and enhancing the exports between Sudan and Tanzania.

The minister explained that commercial relations and trade exchange between Khartoum and Dar es Salaam are below the ambition of the two sides, calling for more and joint work to push forward the trade relations between the two countries, raise the level of the trade balance, revitalize the African Free Zone negotiations and to arrange for the convening meeting of the joint ministerial committee between the two countries.

Madani referred to the historical relations between Sudan and Tanzania, stressing Sudan keenness to enhance the bilateral relations and push them towards wider horizons and to maximize areas of bilateral cooperation through joint committees and mechanisms.

The Tanzanian ambassador affirmed his country's full support to the peace and stability in Sudan, affirming the importance of increasing the areas of cooperation between the two sides.