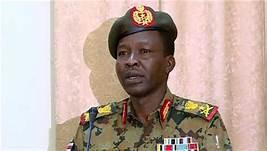 Kadugli, May 25 (SUNA) - The Member of the Transitional Sovereign Council, lieutenant general Shams Eddin Kabashi, stressed that the Sudan’s army, with its two parts, the Armed Forces and the Rapid Support Forces, is united in work for preserving the country's security and stability, indicating that those who are trying the sedition inside the security organization will be disappointed,  calling on all  to miss advocates of sedition in Southern Kordufan community the opportunity, and those who try to get the regular forces into the conflict.

During his address yesterday evening, to the officers, non-commissioned officers and soldiers of the 14th Infantry Division of Kadugli, Kabashi assured them on the harmony between the components of the armed forces in their performance of their national duty, calling for not paying attention to the many rumors that are being released these days.

He lauded role of the officers, non-commissioned officers and soldiers of the 14th Infantry Division in maintaining security and stability in S. Kordufan state, he explained that the visit of a high-ranking delegation came to offer condolences to the families of those who lost their lives in the recent events, which he described as strange incidents to the community of the state, pointing that the visit was an opportunity to inspect the conditions on the ground and hears to all parties.

He stressed that investigation on recent incidents underway, and that that all those involved in it will not escape punishment, pointing to the decisions and actions taken on background of the recent incidents for expediting the arrest of those involved in it, in addition to the control of obtaining and preventing the carrying of weapons for the regular forces during individual movement.

Lieutenant general kabashi presented an enlightment to the officers and soldiers of the 14th Infantry Division in Kadugli on the efforts made by the government to achieve peace in the country through the Juba platform, with the Revolutionary Front with all its factions and the People’s Movement – north, led by Abdul Aziz Al- Helou, who said that negotiations with them are still in the stage of declaring principles, pointing out that the armed forces are not currently engaged in any operations with the armed movements.

Regarding the process of reforming of the security services, he explained that this is left to the armed forces by virtue of their participation in the management of the transitional period, and guaranteeing to preserve its transition and the Sudan’s territorial integrity, pointing to the establishment of the Supreme Council of the Armed Forces, announcing work is underway for amendment of the salary structure of the armed forces.

Meanwhile, the leadership of the 14th Infantry Division in Kadugli presented a report to lieutenant general Kabashi, on its needs, and Kabashi has promised, on his part to discuss the report with the leadership.