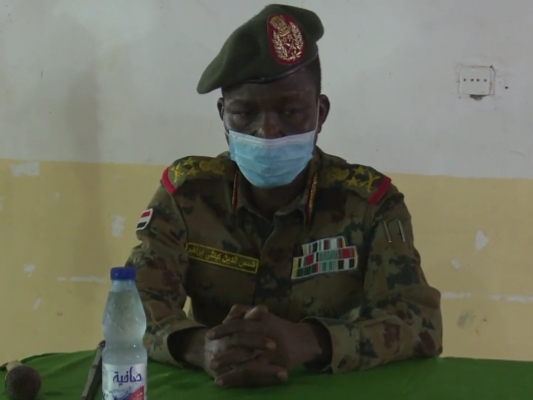 Kadugli, May 25 (SUNA) - The member of the Sovereign Council, Lieutenant General Shams Eddin Kabashi and the accompanying delegation, visited yesterday, the families of victims of the recent incidents in Kadugli an offered the condolences to the  martyrs families, and inspected the wounded whishing them urgent recovery, and the  return of the displaced to their homes.

The member of the sovereign council has expressed deep regret for the incidents which he described as strange to the state’s people, appealing to citizens not to follow the rumors and sedition that make difference between the components of the state community, considering its as planned by hands involved in this matter, calling on the native administration to play a greater role in assisting the security organs to bring the perpetrators to trial.

Kabbashi has pointed to the weak coordination between the regular organs, and a slowness in containing the incidents at the time.

He noted to the involvement of regular forces in the incidents a matter that aggravated the problem, adding: “Whoever is proven to be involved from the regular organs in the incidents will be tried in the field,”  stressing the government ability to impose the prestige of the state and implement the law according to the measures it takes.

He announced the formation of joint forces for the civilians protection, the development of the document signed by the Native Administration for a comprehensive peace conference that enhances societal peace and mend the social fabric, as well as creating conditions for the return of citizens to their homes and their life to normal, as well as the collection of the unregulated weapons from the hands of the citizen, pointing out that security is the responsibility of all regular forces.

He gave directives to the state’s government to set the necessary measures for addressing the problem of the displaced, speed up provision of basic services to them, especially for those in schools, revealing keenness of the government to realize, calmness, and to restore peace and confidence.

Meanwhile, the victims' families demand the government to impose the prestige of the state, stressing their commitment to the document that was signed by the native administration.