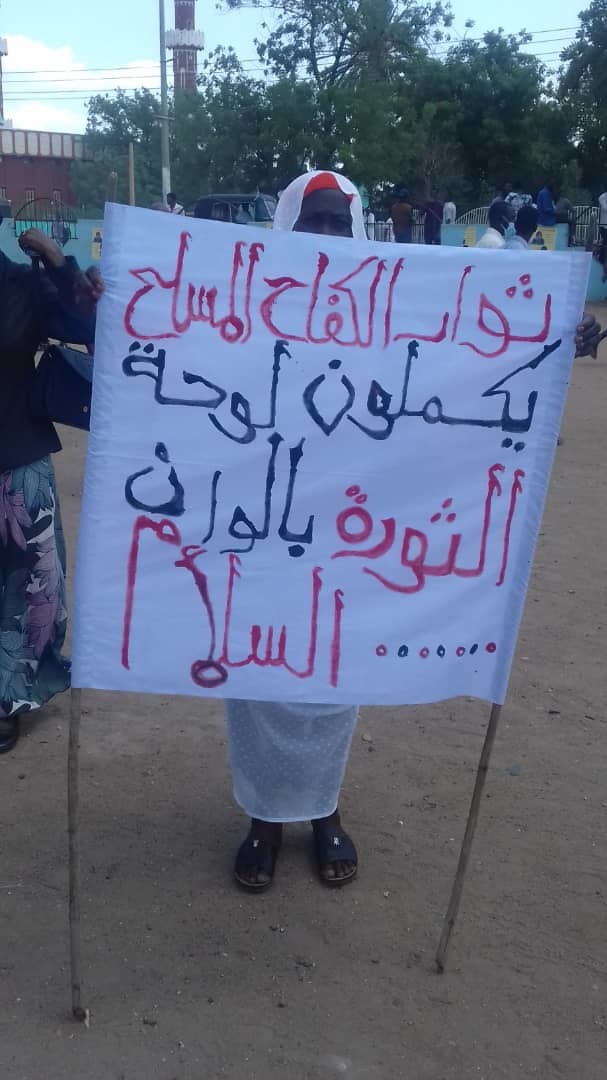 Khartoum, June 30 (SUNA) – A question must be raised,  where does this flow of great energy come from?.

It is not for a day, a week, nor a month, or even for one year, and the young lava kept burning the streets whenever it noticed hesitation or laziness, is it its peacefulness which was guarded by young forearms, a stronger patience, with an accurate knowledge of the target.

Early in the morning, on the revolution time of afternoon of the 30th of June, masses from the alleys, homes, neighborhoods, wooden shades, cottages, and rooms, poured to the street just as the Nile gathered its tributaries from all sides to rush roaring.

From the White Nile state, the member of the forces of freedom and change in the state, al- Sadig Mohamed al Sideeg, witnessed the processions from all the state’s localities that aim to correct the path, and achieve the goals of the revolution, improve the people's livelihood, realize justice by completing all levels of the structures governance.

In Medani, the capital of Al- Gezira state, the police assured the revolutionaries that they were both belong to each other. The state’s Police Director, Ibrahim Ahmed Shemin, affirmed concern with the community safety and security, and the rule of law. the revolution came only to see it applied firmly on everyone under the harmony tone of all security, military and police forces, the Armed Forces, the General Intelligence Service, and judicial and organs for the sake of the safety and stability of the country in order to upgrade and achieve development and prosperity.

When the crowds thrived the state’s security committee decided the opening of the  of Hantoub Bridge to let the masses rushing from other parts of the state to  intermix, noting to SUNA , the state’s acting governor, Major General Ahmed Hanan Ahmed Sebair, asserted his favor to the peoples’ right of peacefully demonstrating the revolution slogans of (freedom, peace, and justice), under the protection of the Armed Forces and other regular forces those who will remain the guardians of the revolution, the homeland, and the citizens.

From the far west Al-Jeneina, the processions and marches of the 30th of June started from different neighborhoods of the city and towns of West Darfur state in the same time with other states chanting the slogans of "Peace Peace.", "I have demands I am not returning back", “Fulfill the revolutions demands.”

The march that have roamed the streets of the city handed over a memo to the state’s  governor, Major General Dr. Rabie Abdullah Adam, calling for the completion of the revolution's demands of the retribution for the martyrs, controlling the borders and preventing smuggling, announcing the results of the investigation into the incidents of Krindug camp, securing the agricultural season, sacking the symbols of the defunct regime and speeding up the work of the committee for the remove of empowerment, combating corruption and money restoration.

The acting governor of West Darfur state, has praised peacefulness of the marches, asserted legitimacy calling for the Sudanese unity to build the country.

This day was one of the days in which the people from Dongola, El- Fasher, El Obyied, Sennar, Kassala, Port Sudan, White Nile, Al Nohud, Al Qadarif, Atbara, Damazin, Kadugli, Delling, all over the Sudan they were revolutionaries, all in the same rank and with the same goal.

There are in the streets that did not betray the demands of rights and faced injustice, while covering the Sudan with the bright suit of its sons, who were on the bumpy path for change, but it was the enthusiasm of the revolution, raising the chants to reach the sky, calling of retribution for the martyrs, comrades of the struggle and the designation of these chants.

Today, the land of Sudan was out sending a message hinting to those who think the revolution has extinguished or its pillar broke, that the boys, the young men and the promising girls, the sisters of men, under the scorching sun were carrying the tools of the peaceful revolution (tires, flags and banners), calling with full mouth that we are able to make this same 30 of June every year.