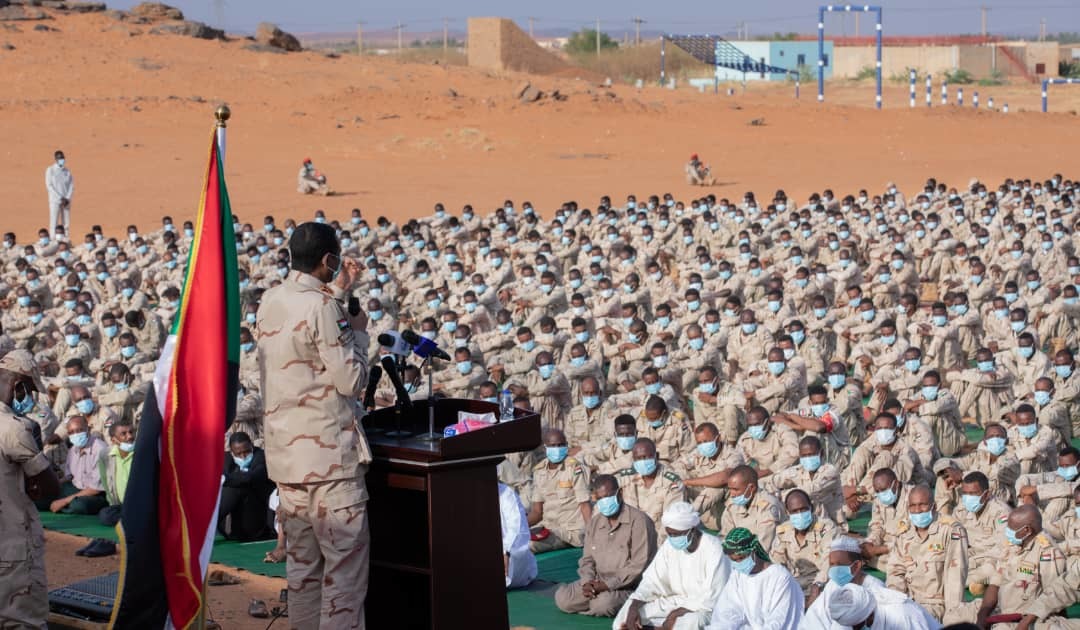 Khartoum, July 31 (SUNA) – The First Vice-President, of the Chairman of the Sovereign Council, Lieutenant-General Mohammed Hamdan Daqlo, commander of the Rapid Support Forces, has warned of sedition and settling dispute which he said are currently destroying the country's capabilities.

In his Address to the officers, the non-commissioned officers and soldiers of RSF, in Al- Nesour Camp, west of Omdurman, after Eid al-Adha prayer, he indicated that there was a well-studied plan for the fighting and an internal agenda rejecting peace.

He added that in the past the foreign agenda rejecting peace was heard, and now the entire international community wants peace, while there are some from inside who do not want peace to be achieved for private reasons. He exclaimed the elements that do not want peace we do not know what they want.

He indicated the artificial reasons for the escalation of sedition and tribal conflicts in Darfur, South Kordufan and the East, stressing the importance of achieving peace and making concessions for the Sudanese to accept each other.

He asked why we are fighting on a land that is wide enough, describing that as Shameful.

Daglo has urged the people of Darfur to unite and miss the opportunity to criminals and stalkers, noting unreal problems in the east, indicating the arrest of suspects with documents.

He called on all the components of the Sudanese community, especially the youth, to consolidate and to be mutually supportive at the heart of one man in facing and fighting sedition, asking them to pray to God to spare the country this seditions.

He pointed out the 16 months that have passed since the revolution of change which still needs cooperation, stressing that the change goes smoothly with price.

He asserted they are many patriots among the Forces of Freedom and Change who reform for the Sudan, calling for the acceptance of each other, congratulating the Sudanese people and the Islamic nation on the occasion of Eid Al-Adha, commending role of the officers, non-commissioned officers and soldiers of the RSF, and the other security services for fully carrying their duties.