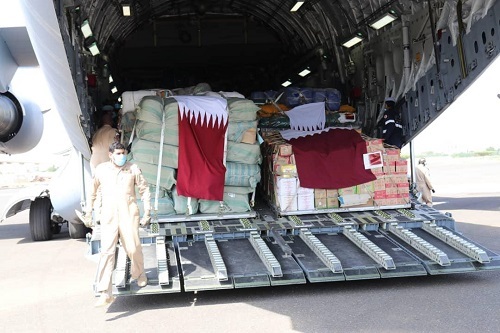 The Qatari aid flights under the directives of his Highness Sheikh Tamim Bin Hamad Al Thani, Emir of the State of Qatar, was received at Khartoum Airport today by the Minister of Labor and Social Development, Lina Al-Sheikh, the  Qatari Acting Chargé d'Affairs in Sudan, Talal Farhan, General Commissioner for Humanitarian Affairs, Abbas Fadlullah, and Director of the Qatari Charity Office in Sudan Hussein Karmash.

the Minister of Labor commended in a press statement at the airport, the Qatari support and their assistance to Sudan in facing the effects of the floods, referring to the eternal relations between the peoples of the two countries and Qatar's efforts to help Sudan in the previous period to confront the Corona pandemic and all the calamities that Sudan is going through, stressing that the government is working to intensify all efforts to confront the diseases and epidemics caused by the floods and torrents, hoping the country overcome this disasters without losses to citizens.

On his part, Talal Farhan pointed to the directives from his Highness Sheikh Tamim bin Hamad Al Thani, Emir of the State of Qatar, to send urgent relief aid to Sudan which comes in the framework of the distinguished relations between the two brotherly and fraternal ties between the two countries.

He hoped the Qatari aid will contribute to support the affected by the floods and torrents, he sent his sincere condolences and sympathy to the flood victims, wishing a speedy recovery for the injured.

The Commissioner-General for Humanitarian Affairs, said that this plane is the first of the air bridge for humanitarian aid including 3 planes containing food, health and shelter materials.

He extended thanks the State of Qatar for its continuous support of the Sudanese people in facing the Corona pandemic and its recent support to alleviate the effects of torrents and floods, referring to the strong relationship between the peoples of the two countries, praising the role of the Sudanese expatriates in the State of Qatar and their great support for their people in Sudan.