Gulwak: The Mediation was Welcomed and Found Acceptance from all Parties 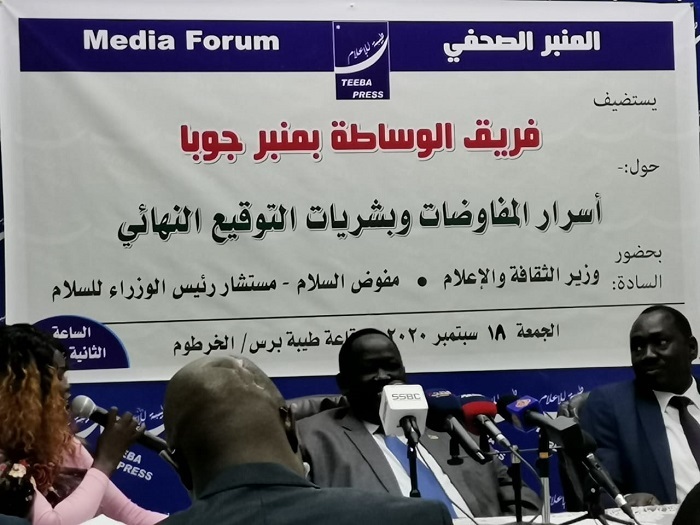 Khartoum, Sep.19(SUNA)-Head of Mediation Team at Juba Forum, Tott Gulwak, has  indicated to necessity of  existence of a  third party for implementation of the agreement  with the negotiating parties  and  narrowing differences  between the parties , disclosing that the mediation  was welcomed  and found acceptance from all parties .

Tott pointed at Taiba Press Forum which held under the titke-Secrets  of  the  Negotiations  and  change Augurs- in  the presence  of Minister of Culture and Information , Faisal Mohamed Salih, Advisor of Prime  Minister , Gumma Konda, the Peca3e Commissioner , Professor Suleiman Al Debailo, pointed to huge role  played by the mediation  in signing the  Juba peace deal  by the initial letters  and reaching a final agreement which set to signed  in  the coming October  in Juba.

Deputy Chairman of the Mediation Team, Dio Mattok pointed out that the meeting of the Prime Minister of Sudan Dr Abdalla Hamdouk with  the leader Of the People’s Movement, Abdul Aziz Al Hilo was out of Juba forum  but , he described and smart and advanced step and  support an d greatly  contributed in narrowing th points of differences  for reaching peace .

Mattok  indicated  to keenness of President of the Republic f the South Sudan , Lt. Gen Salva Kiir Mayardit  on press of peace process where he  directed  halting all activities  during the COVIT-19 period  except the  Sudanese o peace talks.

Mattok went to say that  the file of  Abdul Wahid Mohamed  Nur  was our affair  but we srognly support  his coming to Khartoum  for direct talks  with  te government of Sudan and there  is  no better  chance  for achieving peace  than this chance  for all climates are encouraging  for realizing it.

Minister o Culture and Information , Faisal  Mohamed Salih lauded efforts made by the  mediation representing  the State of South Sudan  and underlined that  were still  one peoples live in two countries  and that the huge works carried out  by the mediation  confirm the truth of this statement.

Advisor  of he Prime Minister m Professor Gumma Konda said  peace promotion  was necessity   in this stage  for no room  for negative media which focus on m negatives  and disregard positives.

Prof . Konda described the agreement as a “ pure Sudanese”  and that what has been done  by the mediation was a fantastic  experiment in  process of  conflict resolution  that deserves  to  documented  and introduced as a distinguished  model.